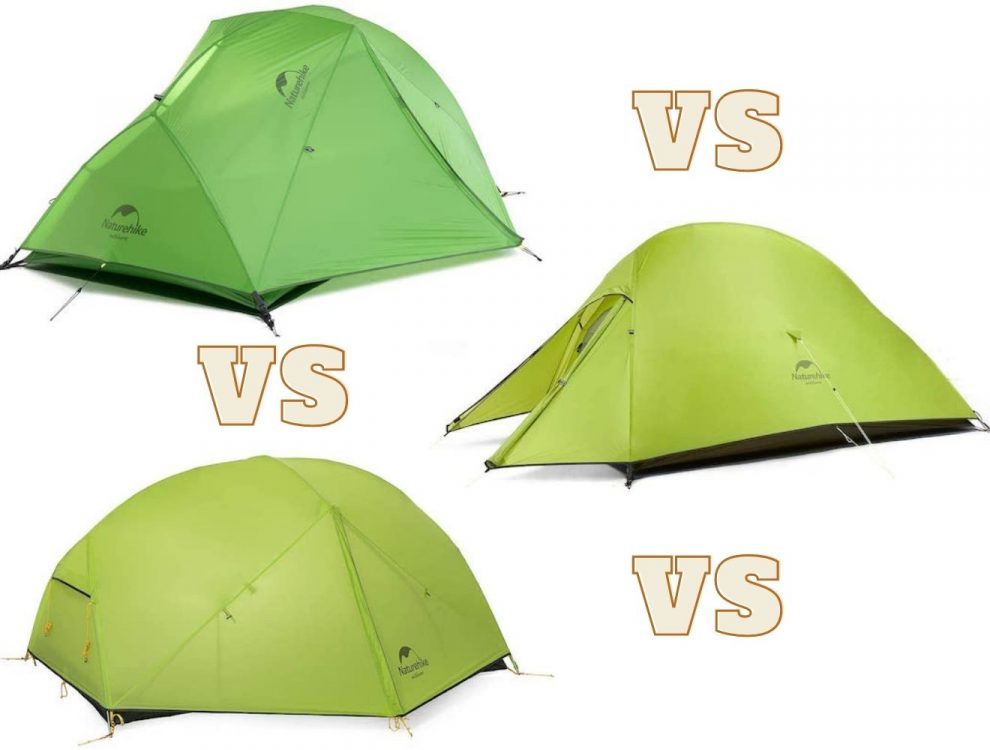 We’ve been asked a number of times to do a spec comparison of Naturehike’s Star River 2 and Cloud Up 2; so that’s what we’ve done. We’ve also thrown in the Mongar 2 so that you can compare the specs of all three. Here’s our Naturehike Star River 2 vs Cloud Up 2 vs Mongar 2 comparison.

Inner space
* The Mongar, Cloud Up and Star River all use a similar pole structure. However, the Mongar’s symmetrical design means it is the roomiest tent.
* The Cloud Up has the least internal space. It has a more streamlined layout because it has a single end door/vestibule, with the tent itself also tapering towards the foot end.
* The Star River sits somewhere in between the two. So, if it’s inner space you want, then the Mongar is probably the one for you.

Dimensions
Naturehike’s dimensions suggest the Star River 2 is slightly longer than the other two tents, but we are not convinced. Naturehike give 215cm length for both inner and outer. However, the inner length is obviously less than the outer length on a double skin tent. We’d say the inner is about 210cm in reality, which is the same as the Cloud Up 2 and the Mongar 2.

Doors
The Naturehike Cloud Up has one door and one porch/vestibule positioned at the end. Whereas, the Star River and the Mongar have two doors. Therefore, if the tent is to be used by two people then either the Mongar or Star River is probably the best choice, allowing each person to have their own vestibule and door.

Mesh and breathability
The Mongar has more mesh than the other tents. This means it may feel cooler in summer, but may be a bit too draughty in winter. The vents are located in slightly different places on the three tents, but all three tents appear to perform adequately in terms of ventilation.

Inner doors
The Star River has an inner door that doesn’t tie back to the side. Instead, it drops to the floor when open, and you can then tie it back along the floor.

Snow skirt
If you choose the version of the Star River with the snow skirt, remember that a snow skirt can flap about if there’s no snow to hold it down which could be annoying when you are trying to sleep and could allow cold wind to penetrate underneath the snow skirt – just something to bear in mind.

Finally, it’s worth noting that you’ll often find conflicting specs for Naturehike’s tents, depending where you look, but this often comes down to the fact that there are lots of versions and models. Choose carefully when you’re buying – you can always check directly with Naturehike if you’re unsure of anything.

Also, check out our article on the Naturehike Cloud Peak 2 3-season tent. Plus, we have featured the Cloud Up 2 and the Star River in our budget 2 person wild-camping tents article. Check it out.

If you’re interested in a tent that is more suited to tall people, check out our The best tunnel tent for tall people – the Wechsel Outpost article.

Hopefully this Naturehike Star River 2 vs Cloud Up 2 vs Mongar 2 comparison will be useful to those that are considering one of these three tents.