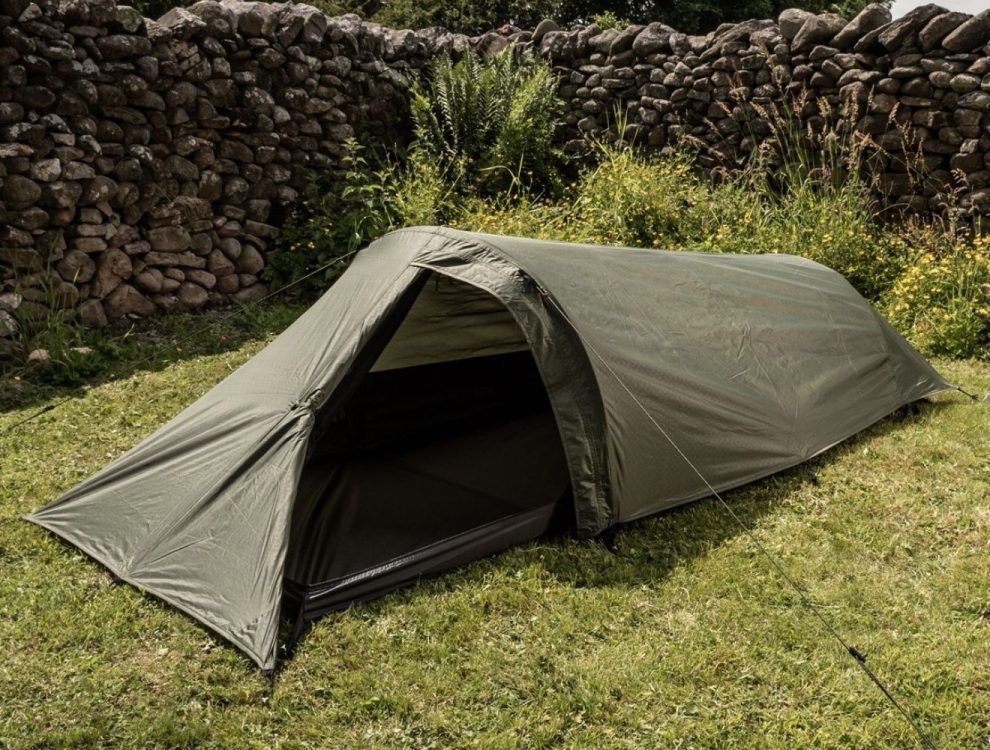 Note: There is the odd error on Snugpak’s site. For example, the inner dimensions for the Snugpak Journey Solo in their ‘Size Guide’ are not the same as the dimensions given in their sizing image. We have taken the image dimensions to be the correct ones, and therefore listed those. If this really matters to you (for example, if you’re tall and every cm/inch counts), it’s worth contacting Snugpak before you buy, to see which are the correct dimensions.

Dimensions
Space-wise, there’s not a lot of difference between the Journey Solo and the Ionosphere. These are spacious 1 person shelters and there should be plenty of room for kit, particularly if you’re travelling light. The Stratosphere is the shelter that is noticeably shorter inside than the other two. None of these shelters comes with a vestibule. However, unless you have a huge pile of gear, there should be enough room inside the main body for gear. Most people would also leave some gear, such as muddy boots, wet jackets, etc outside the shelter, perhaps in a waterproof bag, or even just a bin liner.

Are the Snugpak Journey Solo, Ionosphere and Stratosphere suitable for tall people?
We would say the Journey Solo and Ionosphere are best suited for tall people. They both have inners of 235cm/93″ and 240cm/94″ respectively, which, even when you consider the sloping ends, should be enough for most but the tallest of people. The inside of the Stratosphere is 220cm/87″ which we don’t believe will be that suitable for tall people, and you can’t sleep diagonally in a bivvy, as you can in a tent, as there simply isn’t room. We’d recommend the Journey Solo and Ionosphere if you’re over 6′.

Don’t forget though that you can’t really sit up in these types of shelters. You don’t want to be getting undressed in the rain, nor do you want to be wriggling around inside, trying to get changed. If it is raining you might want to erect a tarp and throw a groundsheet down so that you can get dressed/undressed and cook somewhere out of the rain.

Weight
There’s quite a difference between these three shelters, as you can see from the table above. The Snugpak Journey Solo is the heaviest, followed by the Ionosphere with the Stratosphere being the lightest, as you’d expect due to it being a bivvy. If you’re counting the grams then this is probably important to you. These shelters are not exactly ultralight, but for stealth-camping and short backpacking trips that perhaps doesn’t matter so much. You’re paying less than you would for an ultralight tent, and weight is the trade-off.

Fabrics
The Snugpak Journey Solo is all polyester, whereas the inner and groundsheet on the Ionosphere are nylon. The Stratosphere is all nylon. Polyester is cheaper, but heavier. Nylon is, in general, a better tent fabric. The polyester in the Journey Solo probably contributes to its weight. However, being made entirely from polyester means it is cheaper.

Waterproof rating
All three of these shelters should prove fine for changeable wet weather, such as in the UK. They are all built well and have good HH ratings. However, the Journey Solo and Ionosphere will likely perform the best:

So, we’d say the Stratosphere is the one that will perform the worst out of the three in inclement weather, simply because it has a single skin and is a bivvy, as opposed to a double skinned tent.

However, you’re probably best avoiding any bivvy in cold, wet weather due to condensation and water ingress (they are worth carrying for emergencies though, even if you’re using a tent in winter – just in case your tent gets trashed). If you’re likely to be out in the cold and wet, then you’d be better off with a tent, and the Journey Solo and Ionosphere should be ideal, particularly if you erect a tarp over the top. Remember, it’s not just about build quality, hydrostatic head and taped seams – you also need to consider things like space to cook, getting changed out of wet clothes and storing wet, muddy gear.

Pack size
The Snugpak Journey Solo has the largest pack size and the Stratosphere has the smallest. This is probably to be expected as nylon tends to pack down smaller, plus the Stratosphere is single skinned.

Pitching
Both the Journey Solo and the Ionosphere are inner pitch first. The Stratosphere is single skin so it’s the quickest to pitch as you can throw it up all in one. Some people don’t like inner pitch first tents as the inner gets wet if it’s pouring with rain, however you can get around that to some extent by first throwing up a tarp where possible.

Footprint
The Journey Solo comes with a footprint whereas the Ionosphere and Stratosphere don’t. The Stratosphere’s groundsheet has a hydrostatic head of 8000mm, so it might not need a footprint from a waterproofing point of view, but a footprint is always useful to protect the built-in groundsheet from thorns, sharp stones, etc.

Colours
There are a couple of colours available for the Journey Solo (olive and orange) and the Ionosphere (olive and terrain, plus Coyote Tan ), whereas the Stratosphere only comes in the olive – which, we have to say, is a good colour anyway, and probably the one that most people would go for. The orange of the Journey Solo may be useful if you’re camping somewhere where you might want to be spotted if you got into danger, such as on the top of a mountain in wintery conditions. However, when it comes to colour choice, it really is each to their own.

Price
That just leaves the price. At the time of writing, the Journey Solo is the cheapest. The Ionosphere is the most expensive. The Stratosphere sits in-between. Given the weights, fabrics and other differences we’ve mentioned, we feel this makes sense.

There you go… three really good shelters – the Journey Solo, Ionosphere and Stratosphere.

One feature we like is that you can remove the flysheet on both the Journey Solo and the Ionosphere, leaving just the mesh inner. This is great for summer nights and warmer climates – it really gives you that ‘connected to nature’ feeling. You could also put a tarp over, to protect you from the odd shower. A tarp will also give you more of a feeling of security, whilst you’re sleeping out in the open.

All three of these shelters can feel a little claustrophobic to some campers. The Stratosphere is probably the most claustrophobic, simply because it is a bivvy. However, there are many people who don’t have a problem with this type of shelter at all. Some campers, who were initially claustrophobic in a bivvy or small one person tent, have found that they do get used to it after a bit. If you don’t like the idea of your feet poking through the fabric of a bivvy (ready to be nibbled by a passing animal) then you may want to go for the Journey Solo or Ionosphere which both have the pole at the bottom end of the tent to lift the fabrics away from your legs and feet.

There are, of course, alternatives to these Snugpak 1 person shelters. For example, Jack Wolfskin’s Gossamer tent. For a comparison check out our Snugpak Ionosphere vs Jack Wolfskin Gossamer article.

All three of these shelters are much loved by wild-campers and backpackers. They are compact; relatively light; quick to pitch and low profile – ideal for hunkering down for the night behind a wall, in the trees or on a mountainside. Also, if you like tactical and military style gear then one of these shelters is certainly worth considering.

If you love your Snugpak gear, check out the Snugpak Special Forces sleep system article we did a while ago. It would go perfectly with the Snugpak Journey Solo or Ionosphere and provide you with a robust 4 season wild-camping set up. Also, check out our Snugpak Arrowhead, Spearhead and Tomahawk comparison article… three great jackets, there.

Snugpak Journey Solo vs Ionosphere vs Stratosphere – which should you choose?

If weight is of the greatest importance to you, then the Stratosphere may be the way to go, especially if you’re not too tall and you’re not camping in cold, wet weather. However, if you’re happy to carry a bit more weight you will get more room with the Journey Solo and Ionosphere, and these two shelters are more suited to tall people or simply people that prefer a little more room. These two shelters are also a better choice if you plan to camp in cold, wet weather.

Naturehike Cloud Up vs Cloud Peak vs Mongar